Thank you for reading my article “Pets on Film”. You can find more articles in Pets Club.

“101 Dalmatians” (1996): Both the animated classic and the live-action versions of this story are wonderful, but to keep the recommendations relatable, I’ll highlight the latter. Owners of multiple dogs will revel in the story of Roger (Jeff Daniels) and Anita (Joely Richardson) who – along with doggie parents Perdita and Pongo – become the owners of an usually large brood of adorable Dalmatian puppies. But life isn’t exactly a simple, black-and-white existence for the couple, as scheming fashion designer Cruella De Vil (Glenn Close in a wild and wicked performance) steals the puppies to make herself a coat.

“Beethoven” (1992):It spawned a handful of cleverly titled (“Beethoven’s Second,” etc.) but lame sequels, but looking back, the first “Beethoven” movie was pretty good. Featuring a slobbery St. Bernard in the title role, the film finds a suburban family (headed by mom and dad Charles Grodin and Bonnie Hunt) caught up in a devious veterinarian’s plan to conduct experiments on their 185-pound pooch. Look for the then-unknown David Duchovny as the unsuspecting target of the dog in a small but memorable role.

“Best in Show” (2000): Although Christopher Guest’s movies are often described as “mockumentaries,” Guest describes them as “comedy-style documentaries,” because it’s never his intention to mock his characters. In “Best in Show,” Guest probes the eccentricities of diehard dog show handlers prepping for a major dog show. The result is arguably one of the funniest comedies of the decade. The movie comes to life through Guest’s insanely talented improvisational troupe, including Eugene Levy, Catherine O’Hara, Michael McKean and Parker Posey. Fred Willard steals the show as a clueless television color commentator at the big event.

“The Black Stallion” (1979): Though he’s become legendary for “The Godfather” trilogy, Francis Ford Copolla showed that he has a deft hand at different kinds of family films (in the traditional sense of the word – not the Corleone type of “family”) with “The Black Stallion.” The film tells the story of a boy named Alec (Kelly Reno) who forges a strong bond with a wild Arabian stallion after a shipwreck strands them together on a desolate island. After their rescue, the wild ride continues: The pair teams with an ex-jockey and horse trainer (Mickey Rooney) – racing to a breathtaking finale on the horse track.

“Buddy” (1997): Some people have so many pets that their house is like a zoo. But in the amazing true story of Trudy Lintz, an eccentric socialite in the 1930s, her house is a zoo. Affectionately played by Rene Russo, Lintz has a menagerie of pets, including parrots, chimps and an orphaned gorilla she names Buddy. Raising the gorilla from infancy, Lintz treats Buddy like her son, even dressing him in clothes. With her kindness, can Lintz keep the beast from coming out of Buddy? Some of the animal cast is real, but the Henson Creature Shop lends a hand to bring the very believable Buddy to life.

“Cats And Dogs” (2001): Long before we heard Alec Baldwin’s bark, we got to see his bite, too, as the voice of one of the dog characters in this hilarious comedy throw-down between a group of canines (also including the voices of Tobey Maguire, Michael Clarke Duncan and Susan Sarandon) and a maniacal feline (Sean Hayes) who’s bent on ridding the planet of all dogs. In between the fighting cats and dogs are a human family headed by Jeff Goldblum, who is on the verge of discovering a potion for dog allergies. Who wins? That’s for you to find out, but I will say Hayes is a scream in his delectable, over-the-top voice role.

“Charlotte’s Web” (2006): The latest in the class of wonderful pet-based family films to hit the big screen, the new live action/animated version of E.B. White’s classic tale is a real hoot. Dakota Fanning plays Fern, a caring young farm girl who tries to prevent a charming piglet she names Wilbur (Dominic Scott Kay) from meeting an untimely demise merely for being born the runt of the litter. Of course, playing a big hand in Wilbur’s fate is the wise old spider Charlotte (tenderly voiced by Julia Roberts), whose home-spun messages draw attention to the young pig’s charm and inspire in the process. The all-star voice cast includes Steve Buscemi as the scheming barn rat Templeton, Robert Redford as Ike the Horse, Oprah Winfrey as Gussy the Goose and John Cleese as Samuel the Sheep. Sam Shepard brings an extra layer of warmth to the proceedings as the film’s narrator. 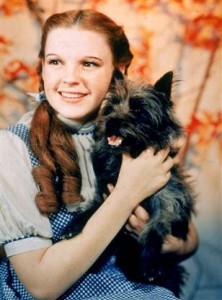 “Garfield: The Movie” (2004): Longtime fans of the comic strip-turned-television star will enjoy the big-screen debut of this legendary lasagna-loving furball, who appears in the live-action world through the wonders of computer generation. The comedy adventure finds Garfield (voiced by a whimsical Bill Murray) trying to locate his owner Jon’s (Breckin Meyer) lost dog Odie (played by a real dog); and playing matchmaker between Jon and an attractive veterinarian (Jennifer Love Hewitt). The movie is geared more toward kids, but adult fans will love the trip down memory lane.

“Lassie Come Home” (1943): There have been several films and television shows based on Eric Knight’s short story of this iconic collie, but none are as moving as the original, “Lassie Come Home.” The film is about the test of Lassie’s devotion to her young owner, Joe (a young Roddy McDowall), after his unemployed father sells the dog for food and rent. Sold to a Scottish duke, Lassie becomes determined to find her way home to Yorkshire, despite miles of peril along the way. The film also stars a young Elizabeth Taylor as the duke’s daughter.

“Stuart Little” (1999): Yes, indeed, people do have mice for companions, too. This film, based on E.B. White’s classic novel, argues that a mouse can not only be a pet, but a member of the family, too. Another computer-animated character in a live action movie world, Stuart Little (sweetly voiced by Michael J. Fox) is a wise young mouse who is an immediate hit with his adoptive human family (Hugh Laurie, Geena Davis and Jonathan Lipnicki) but is despised by the family’s cat, Snowbell (the hilarious Nathan Lane), who conspires to get rid of him. The film’s first sequel “Stuart Little 2,” is at least as entertaining as the first.

Article by Megan. Thank you for reading my articles. More articles about pets in Pets Club.