Pet Loss – Should You Clone Your Cat?

Clone your cat, go to jail… or at least pay a fine. That’s the goal of animal welfare activists who announced recently that they are seeking state and federal restrictions on the small but growing pet-cloning industry.

The effort has been spearheaded by the American Anti-Vivisection Society [AAVS] (in suburban Philadelphia) and takes aim at companies such as Genetic Savings and Clone Inc., the California company that began to fill orders for cloned cats last year. The clones – which have sold for thousands each – are genetic duplicates of a customer’s deceased pet and represent the leading edge of an emerging sector that advocates predict could eventually reap billions of dollars for corporate cloners.

The movie, the 6th Day, starring the erstwhile governor, Arnold Schwarzenegger, features pet cloning businesses in a shopping mall during its opening sequences. It may soon be the case that life imitates art in this respect and pet cloning franchises may start popping up in common shopping venues. But not if the AAVS have their way.

Should Cloning Be Allowed? 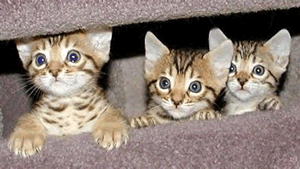 Several companies are racing to compete with Genetic Savings and Clone, the current industry leader, which has produced about a half-dozen cloned cats and aims to achieve the more difficult goal of cloning a dog this year. Some companies are already selling fish genetically engineered to glow in the dark, while one has said it will soon produce cats engineered to not cause reactions in people allergic to them.

The AAVS petitioned the Department of Agriculture to regulate pet-cloning companies as it does other animal research labs under the Animal Welfare Act. The act demands minimum standards of animal care and detailed reporting of the fates of laboratory animals. They have also been working with a California lawmaker to introduce state legislation that would ban the sale of cloned or genetically engineered pets.

Are Grieving Pet Owners Being Taken Advantage Of?

“Pet cloning companies offer false hope of never having to let go of a pet and are causing harm to animals in the process,” the AAVS concluded in a report, “Pet Cloning: Separating Facts From Fluff. “Managers of Genetics Savings and Clone denied emphatically that their enterprise takes advantage of grieving pet owners or harms animals.”We bend over backwards to make sure people are doing this for the right reasons,” said company president Lou Hawthorne. Nonetheless, he said, “we’re open to additional oversight, provided it makes sense.”

The Risks Involved For Cloned Animals

Previously cloned animals have suffered high rates of biological abnormalities and unexpected deaths during gestation and in the first days of life. Hawthorne said that has not been the case with cats. But critics said the process raises other concerns, including the welfare of egg donor and surrogate-mother animals that must undergo multiple surgeries as part of the process of making clones.

The Risks To Owners

The potential for consumer fraud is also an issue. Clones tend to be ordered by people who are grieving the loss of a much-loved pet and who may have unrealistically high expectations of their clones. Although they share identical genetic profiles, clones do not always resemble originals because coat patterns are not strictly genetically determined. Personalities and behavior patterns are even less predictable on the basis of genetics alone. All personalities are products of some basic genetics, and the environment in which the animal is raised and, since a particular environment can never be perfectly recreated (there’s always a random element) personalities will, most likely, be different as well in any clone. “Consumers are likely under the impression that a clone is a carbon copy. We believe they are being misled,” AAVS policy analyst Crystal Miller-Spiegel said.

Personally, however, cloning is one option I’m not in favor of but it might be for you if you’re looking at replacing a pet that’s died. As I mentioned above, the clone may look identical to your lost companion but the personality will likely be different. That’s not to say the personality will be better or worse, just different. Look at it this way – how many sets of identical twins have the same personalities despite having the same genetic make-up and being raised in the same environment? There are always random factors involved. Every personality is unique and passes this way only once. Remember this when you decide whether to clone your cat.

If you find yourself in a position where you would consider cloning to be an option that will help you cope with the death of your cat, you should do some background reading first. The National Geographic has a news item on pet cloning and some people’s reaction to it.

Here’s one for you: http://www.catnews.org/