Dog Medicine used to Treat Heart Worms in Puppies. T.S. Eliot once called April “the cruellest month,” though he probably wasn’t thinking about heart worms at the time. You see, April is the month that most veterinarians start checking dogs for heart worm organisms they may have been exposed to during the previous mosquito season. The worms can only be detected after they reach sexual maturity, which takes about six months. Before this time, the host will not exhibit any symptoms. According to most experts, heart worms are easy to prevent, but hard to cure. 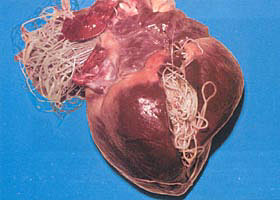 Because the disease is spread by infected mosquitoes, cases of heart-worms are more common in temperate and tropical areas. That said, cases have been reported in all 50 states, even in Alaska! Dogs of any age can contract the diseases, even puppies. In fact, they are far more likely to succumb to it, since they have an immature immune systems. That is why most veterinarians recommend starting puppies on heart-worm preventives as early as four weeks of age. These medications have been proven up to 99 percent effective at preventing the disease.

How do they work?

For less than the cost of a cup of coffee, you can protect your furry friend from this deadly disease. Pills, tablets, and topical solutions can be purchased with a prescription, either online or at your vet’s office. The most popular preventative treatment is a beef-flavored chewable tablet that must only administered once a month. Trust us, it’s worth the money!

* There are a number of effective medications on the market today, including:

* Sentinel: Combines a heart-worm preventative with a flea-control agent.

* Heartgard Plus: Sold in chewable cubes, it protects against heart-worms, roundworms, and hookworms.

* Proheart: Prescribed in tablet form, it guards against heart-worms alone.

* Revolution: This topical solution is the latest in heart-worm preventative care. It also protects against fleas, ticks, and ear mites.

Heart worm disease isn’t always easy to detect, even for a trained professional. The symptoms come on slowly, as the worms grow; and they are often mistaken for other, more common conditions. Your puppy may have a nagging cough or be a bit lethargic. But it is only during the final stages that symptoms are impossible to miss. For example, your furry friend may pass out because the worms are obstructing the blood flow to his brain. He may also retain fluids and develop a distended abdomen.

Puppies have an awful lot of energy, so when they seem tired on a daily basis that may be a sign they have heart worms. If their breathing is stertorous or in any way labored, they should be taken to a veterinarian as soon as possible. Last but not least, if a puppy is eating regularly but is still losing weight or even failing to gain, he may have a late-stage case of heart worms. In fact, that is the most likely explanation for why he is unable to maintain a healthy weight.

If your pet tests positive for heart worms, he can still be treated. Unfortunately, treating the disease is often painful for the puppy and expensive for his owner. The prescription medication that is used to kill the mature heart worms is called Immiticide and it contains arsenic. Depending on their weight, puppies are typically given two or three injections that will terminate the worms residing in the vessel of their hearts. The treatment can cost anywhere from 0 to 00. It is almost always more expensive for puppies, since vets typically recommend pre-treatment workups that include x-rays and blood work to establish how serious the infection actually is. Recovery is also more difficult for younger dogs.

According to veterinarians, more dogs die after heart worm treatment than during it, and not because of the drugs! The medicine that kills the heart worms also causes them to break up into pieces. In time, they will be excreted from the animal’s system. But this will only work if the dog stays quiet and does not engage in exercise. If he does over exert himself, there is a very good chance that these tiny pieces of dead heart worms will block a major blood vessel and cause immediate death. As you might imagine, it is easier to keep an older dog quiet than a young puppy that is bursting with energy. And that is why puppies succumb to heart worms at a much higher rate than older dogs.

Fortunately, the disease is easy to prevent. Make sure your new dog is started on a heart worm preventative soon after his first checkup, at around six weeks of age. These prescription medications can be purchased directly from your veterinarian or at discount from online pet pharmacies.

Phillip Collins is a freelance writer who writes about pet care and products such as dog medicine.